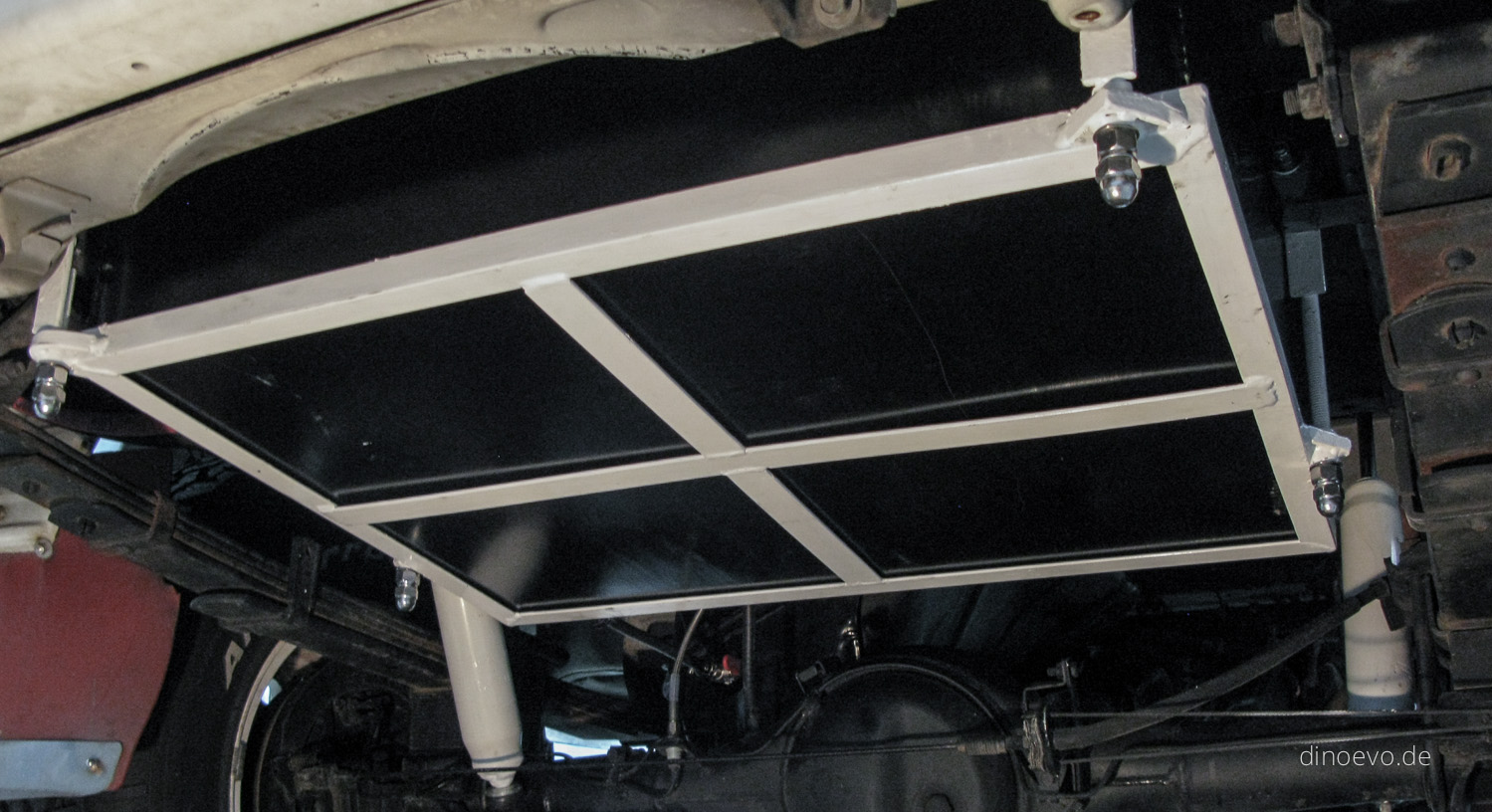 After a long time of figuring out the right approach, the auxiliary fuel tank is finally done. It is a 85 Litre custom aluminum tank in the same spot where the spare tire used to be.

Due the size of the new wheels, the spare tire does not fit anymore in the stock location which left a nice, large area for either a storage compartment or a tank. After I changed the stock exhaust to one with an side exit, the idea was to have a tank there. The problem was, that we couldn’t figure out a proper way to fill the tank. Also the size of the tank couldn’t be exceeded beyond around 40-50 Litre, which was not big enough for the additional effort and cost of a second tank.

Design:
In the end we gave up the storage compartment idea and went ahead with a large tank in the back. Many people who run WVO have their second tank in the same spot. What I don’t like on all of them is that they take away the great departure angle, therefore our design had to be different.

In the initial design I tried to push a squared tank as far up between the crossmembers as possible. Later on the tank grew and reached far more forward including two big angles. One along the leaf springs and another above the rear axle. After taking rough measurements I created a few cardboard prototypes to make sure everything fits. Andrew – our welder – did then a fantastic job fabricating a 1/8″ aluminum tank from my drawings. He also came up with the basket system to securely hold the tank up.

Connections:
I wanted to keep it as simple as possible. No pump or electric valve to fail, no pickup and return line. Just a simple feed to the stock fuel tank including a manual valve to disconnect the two tanks. The only thing I had to add was a steel fitting in the stock tank. The Broadway Welding Shop took care of that.
The breather hose was a little bit more work as it has to be as high up as possible which means I had to drill through the subframe. Not to weaken the frame and also to make my life easier with the hose I cold-welded a stainless steel pipe through the frame and connected the breather hose to it.
For the filler hose I got a good deal on a 1.5″ I.D. fuel hose without a wire in it, which makes it way more forgiving to work with in smaller voids, but on the other hand you get pretty quick some kinks in it. I thought about using just the stock filler for both tanks, but found it would make it more complicated. Instead we installed a Perko Marine filler neck* with an extra lock* on the side of the van right next to the tail lights.

Painting:
Even though all fittings are stainless steel and the tank is out of aluminum, I wanted to give the system extra protection against corrosion. Therefore I primed and painted everything with Tremclad. Also while the stock fuel tank was out, I gave him a good coat of paint and all new hoses as well.

In combination with the stock fuel tank (60 Litre) we should get now a rang from around 1300km per fill up.